The 1903 World Series ushered in the era of traditional post-season match-ups between the pennant-winners of the National and American Leagues.
The young American League was desperately trying to establish itself as a viable competitor to the established National League.  Following two years of hostilities the two pennant-winning owners were able to agree upon a best-of-nine series that would pit their two teams against each other, a step that would help unify the two leagues in peaceful coexistence.

The National League was represented by the three-time defending champion Pittsburgh Pirates, who were anchored by future Hall of Fame shortstop Honus Wagner.  They would wage battle with the Boston Americans, who had dominated the American League behind 28-game winner and future Hall of Famer Cy Young. 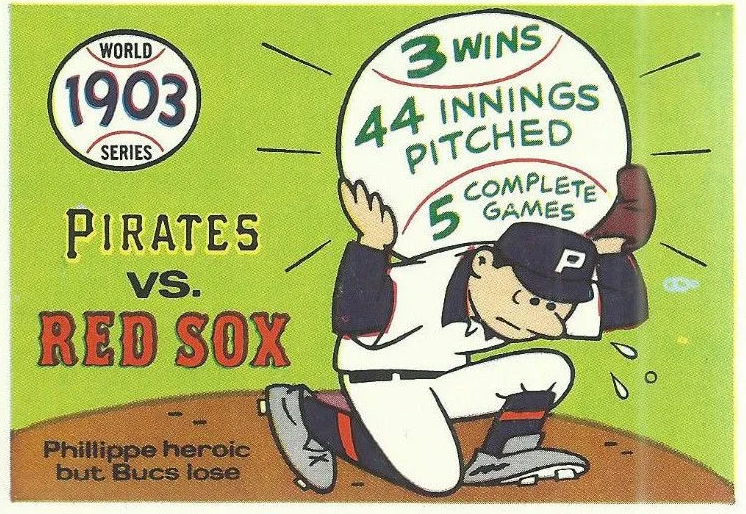 The first inning started off innocent enough for the future Hall of Fame hurler, retiring the first two batters of the game.  But things quickly got away from Boston as batting champ Honus Wagner singled home Tommy Leach, who had tripled, and then quickly stole second despite an injured leg.

Americans second baseman Hobe Ferris then booted what should have been an inning-ending grounder, and catcher Lou Criger made a bad throw on a stolen base attempt, allowing Wagner to score.  Following a walk and another stolen base the Pirates capped off the scoring with a two-run base hit by Jimmy Sebring and were up 4-0 before the first Boston batter even stepped to the plate.

While Pirates starter Deacon Phillippe was sitting Americans batters down, including striking out five in the first two innings, Sebring plated another run in the third and Boston allowed another unearned run in the fourth, putting them in a 6-0 hole.  The Pittsburgh lead stretched to 7-0 in the seventh when Sebring topped off his three-hit, four-RBI day with an inside-the-park home run!

Boston finally broke through with back-to-back triples from Buck Freeman and Freddy Parent in the seventh, and they managed to get the tying run into the on-deck circle in the ninth.  But it was too little, too late.  The American League champs had started the 1903 World Series with a home loss behind their legendary ace and looked overmatched against theirSenior Circuit counterparts.

Boston responded quickly to their Game 1 loss by jumping on Pirates starter Sam Leever, who was battling a trap-shooting shoulder injury, for two first inning runs.  Lead-off hitter Patsy Dougherty got the scoring started with an inside-the-park home run, and Buck Freeman drove home Chick Stahl, who had doubled, with his third hit of the young series.

Leever, the National League ERA leader on the regular season, was obviously not himself and wouldn't come out for the second inning as the Pirates instead sent young rookie Bucky Veil to the hill.

Veil bulldogged his way through the rest of the game, giving up only one more run on Dougherty's second four-bagger of the day, but the story was the fantastic pitching of the Americans Bill Dinneen.  The 21-game winner scattered a mere three hits over nine innnings for a complete game shutout, and the 1903 World Series was suddenly compelling.  The Pirates were in for a dogfight.

Interest in the series returned for Game 3, so much that the crowd actually spilled onto the field and required that the rules account for hits into the outfield crowd, which would be considered doubles.

The Pirates sent Game 1 winner Deacon Phillippe to the mound, hoping to regain the momentum, and the cunning right-hander delivered another gem.

Pittsburgh took another early lead on two ground-rule doubles into the outfield crowd by Claude Ritchey and Ed Phelps in the second inning, taking quick advantage of the adjusted rules.

They put more pressure on Boston's Tom Hughes in the third with a lead-off walk, another ground-rule double and an RBI single by Tommy Leach, chasing Hughes from the game and forcing Americans player/manager Jimmy Collins to call on Cy Young again.  Young immediately plunked Honus Wagner but managed to escape the inning allowing only one more run and keeping the deficit at 3-0.

That would be all that Deacon Phillippe would need as Boston manufactured only single runs in the fourth and the eighth while Pittsburgh added an insurance run in the top half of the eighth.

Phillippe had his second complete-game victory in three games, and the Pirates held a 2-1 lead in the 1903 World Series as the teams headed to Pittsburgh.

Because a rainout pushed Game 4 back a day, Deacon Phillippe was able to take the hill for the Pirates for the third time in the first four games of the 1903 World Series, and it would ultimately give him his third win as well.

The Pirates scratched across a run in the first inning against Game 2 winner Bill Dinneen, and Phillippe got into his familiar groove, allowing only one hit through the first four innings.  Boston pushed the tying run across in the fifth with a couple of hits by LaChance and Criger, but Pittsburgh quickly answered with a run of their own in the bottom of the inning on a triple by Ginger Beaumont and base hit by Leach.

It looked like the game was over when Leach delivered again in the seventh with a two-run triple followed by Honus Wagner's RBI single, giving Deacon and the Pirates a 5-1 lead with only six outs to go.

But Boston made it interesting in the ninth, getting five base hits and a sacrifice fly from the first seven batters to get the score to 5-4 with a man in scoring position and two outs.  But Phillippe coaxed pinch hitter Jack O'Brien into a pop-up to second, and the Pirates took a commanding 3-1 lead in the best-of-nine series.

With the National League feeling pretty good about its dominance through the first four games of the 1903 World Series, the American League champs were facing an uphill battle, down 3-1 with three more games on the road.

Boston sent future Hall of Famer Cy Young to the mound for Game 5, hoping he could rebound from his Game 1 loss and provide the Americans with a much-needed spark.  And that's exactly what he did, both on the mound and at the plate.

Both teams failed to push any runs across during the first five innings, but it was Boston that broke the ice in the sixth, taking advantage of three Pirate errors while also getting back-to-back triples from Young and Dougherty and opening up a 6-0 lead.

They piled it on in the seventh, stretching their lead to 10-0, while Cy Young continued to groove nearly unscathed, eventually nailing down a decisive, and much-needed, 11-2 victory.

The momentum of the previous day carried over into Game 6 as Boston continued to knock the baseball around the park while Pittsburgh still preferred to kick it.

By the end of the fifth inning the Americans had already built a 5-0 lead, thanks in part to three Pirate errors, while their hurler, Bill Dinneen, was innocently stranding baserunners.

The Pirates broke through with three runs in the seventh, but after letting Dinneen off the hook by leaving the bases loaded, they managed no real threat the rest of the game.  The 1905 World Series was tied back up with one more game remaining in Pittsburgh.

To try and turn the tide of the 1903 World Series, the Pirates sent Deacon Phillippe to the mound for Game 7.  He had won Games 1, 3 and 4, though not necessarily in overly impressive fashion, and appeared to be the only one who could keep the Boston bats in check.

But that would end quickly.

Boston's Jimmy Collins and Chick Stahl both tripled in the first, giving the Americans an early 2-0 lead that immediately put the pressure on the Pirates, who were once again up against the legendary Cy Young.

Two more triples and runs in the top of the fourth inning by Boston more than made up for the single run Pittsburgh scratched across in the bottom of the inning, and a clutch two-run single by Lou Criger in the sixth all but put the game away.  After an interesting ninth, where the Pirates got three singles to lead off the inning, the Americans had a 7-3 win and a 4-3 series lead heading back home to Huntington Avenue.

Three straight losses at home seemed to have sucked the life out of the Pirates, and with a confident Bill Dinneen on the hill for Boston, Pittsburgh was in for a tough Game 8.

Pittsburgh's Deacon Phillipe made his fifth start of the series and held his own against Boston in the early innings.  But Hobe Ferris came through with a two-run single against him in the fourth, and then in the sixth Phillippe was picked off first following a strike out, squelching a prime scoring opportunity.

Dinneen settled in over the last three innings, allowing only one baserunner on a walk, and completed his second shutout of the 1903 World Series, giving the Americans the title.

The 1903 World Series featured strong pitching and shaky defense, but it ultimately proved popular enough to be more than just an experiment.

The animosity between the two leagues wasn't completely healed, as the following year would eventually prove, but the stage for a regular post-season series between the two major leagues had been set.