The 1905 World Series saw the New York Giants redeem themselves by not only agreeing to appear in the post-season but also giving fans one of the most dominant team pitching performances in history.
GOOD PITCHING BEATS... - After dominating the National League with a 105-48 record, the Giants entered the post-season looking to rekindle the fan support that, though still the highest in the league, had fallen significantly from the previous year.

Their opponent would be Connie Mack's Philadelphia Athletics team, which had brought home their second pennant in four years.

offenses and swing-and-miss arms, but with all-time greats like Christy Mathewson for New York and Chief Bender and Eddie Plank for Philadelphia taking the mound, pitching would take center stage.

Future Hall of Fame managers Connie Mack and John McGraw were had plenty of talent to lean on in order to prove their league's superiority. The 1905 World Series match-up promised to be something special. 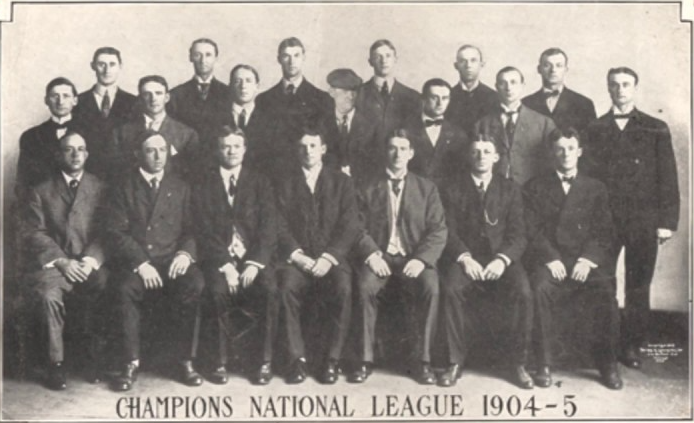 Game 1 featured a pitching match-up of future Hall of Famers, with Christy Mathewson taking the hill for the Giants and Eddie Plank for the Athletics.

Plank worked his way out of a couple of jams in the first and second innings, but the Giants finally broke through in the fifth when Mike Donlin delivered a two-out RBI single and Sam Mertes brought him home with a ground-rule double.

Meanwhile, Mathewson was his masterful self, getting some help from his defense with a double play in the third and then throwing a runner out at home himself in the sixth.  The Athletics were completely baffled and never put more than one runner on base in an inning.

After adding another insurance run in the final inning, the Giants wrapped up Game 1 to take an early 1-0 lead in the 1905 World Series.

Game 2 saw two more future Hall of Fame hurlers toe the rubber as the Athletics called on a young Chief Bender to even up the series against veteran 21-game winner Joe McGinnity.

Philadelphia finally scored its first run of the 1905 World Series in the third inning, aided by New York first baseman Dan McGann's error that allowed a lead-off runner, when Bris Lord came through with a two-out RBI single.

While Bender, who had to work out of run-scoring situations in the first two innings, seemed to hit a groove in the middle innings, the Giants defense hiccuped again in the eighth.  Catcher Roger Bresnahan couldn't handle a put out at home that would have ended the inning, and Bris Lord made him pay double with his second RBI single of the game.

New York threatened in the final innings, getting multiple base runners in both the eighth and ninth, but they failed to get the clutch hit and yielded to Chief Bender's fantastic performance.

With the visitors winning both Game 1 and Game 2 of the 1905 World Series, the Athletics looked to break that trend in Game 3 with another young gun named Andy Coakley, who had won 18 games and posted a 1.84 ERA in a breakout season.

Unfortunately, he was facing Christy Mathewson and a high-powered New York offense that was coming off a game where it managed only four hits and no runs.

The Giants jumped on Coakley in the first.  After he hit Bresnahan to lead off the game, New York scored on back-to-back singles from Donlin and McGann and added a second run on an error by Philadelphia second baseman Danny Murphy.

While Mathewson was sitting Athetlics down inning after inning, the Giants blew the game open in the fifth on another crucial error by Murphy, three singles and a successful double-steal of second base and home.  By the end of the inning the Athletics were down 7-0 and "Matty" was at the top of his game.

The dominant right-hander cooly worked his way through the second half of the game, unphased by the occasional base runner, and posted his second complete-game shutout of the series, giving the Giants a 2-1 series lead.

Game 4 matched up the losing pitchers of the first two games, but both would bounce back in classic pitching duel.

While both teams remained scoreless through the first three innings, neither pitcher had quite settled down, allowing base runners in every inning but managing to escape unscathed.

That changed in the fourth inning when Athletics shortstop Monte Cross booted a lead off ground ball and allowed Sam Mertes to reach base safely.  Plank looked to get out of it after retiring the next two batters, but New York second baseman Billy Gilbert delivered a clutch RBI single and gave the Giants a narrow 1-0 lead.

The tone of the game changed as both pitchers locked in during next few innings, with only one other runner reaching base until the eighth.

Philadelphia's Topsy Hartsel coaxed a lead-off walk and advanced to third on a two-out single by Lave Cross.  But McGinnity struck out Socks Seybold to end the inning and the Athletics' final threat.  He struck out two more batters to end the game in the ninth and give New York a 1-0 victory and a 3-1 series lead.

Like most of the times he climbed the hill, Matty did not disappoint.

His lack of rest showed a bit early, giving up a line drive single to start the game and two base hits in the second inning.  But despite Mathewson not having his best stuff, the Athletics still could not scratch across a run, losing their best opportunity in the fifth at third base in a two-out run down.

In the bottom of the fifth the Giants managed two walks off Bender to start the inning and moved them into scoring position with a sacrifice bunt.  Philadelphia avoided a big inning by throwing out an advancing runner at third after a sacrifice fly, but with Matty on the mound the single run seemed almost insurmountable.

Mathewson continued to battle back from adversity in the sixth when he couldn't handle a lead-off grounder and opened the door for a Philly scoring chance.  Two batters later he erased the runner with a pick off and effectively shut the door.

The Giants added an insurance run in the bottom of the eighth, and Mathewson finished off the 1905 World Series by retiring the final ten batters, earning his third complete-game shutout victory and bringing the championship to New York.


The 1905 World Series was historic for a number of reasons, including the formalization of the World Series tradition, Connie Mack's first Fall Classic appearance and Christy Mathewson's only title.

But the pitching performance of Mathewson and McGinnity, along with Red Ames, was perhaps the greatest in World Series history.  They held the American League-leading Philadelphia offense to only three runs, none of which were earned, and hurled four shutouts.

Christy Mathewson's 1905 World Series performance, with three shutouts and eighteen strikeouts against only a single walk, is one of baseball's legendary individual feats.