The 1906 World Series was the first to feature two teams from the same city, pitting the Chicago White Sox from the South Side against the Chicago Cubs from the West Side, and would go down as one of the greatest Fall Classic upsets of all time.

While the White Sox, and their American League worst .230 team batting average, were expected to struggle at the plate, the Cubs paced the National League with a .262 team average and an astounding 116-36 record and were looking to roll right through their light-hitting counterparts.

That would not be the case. 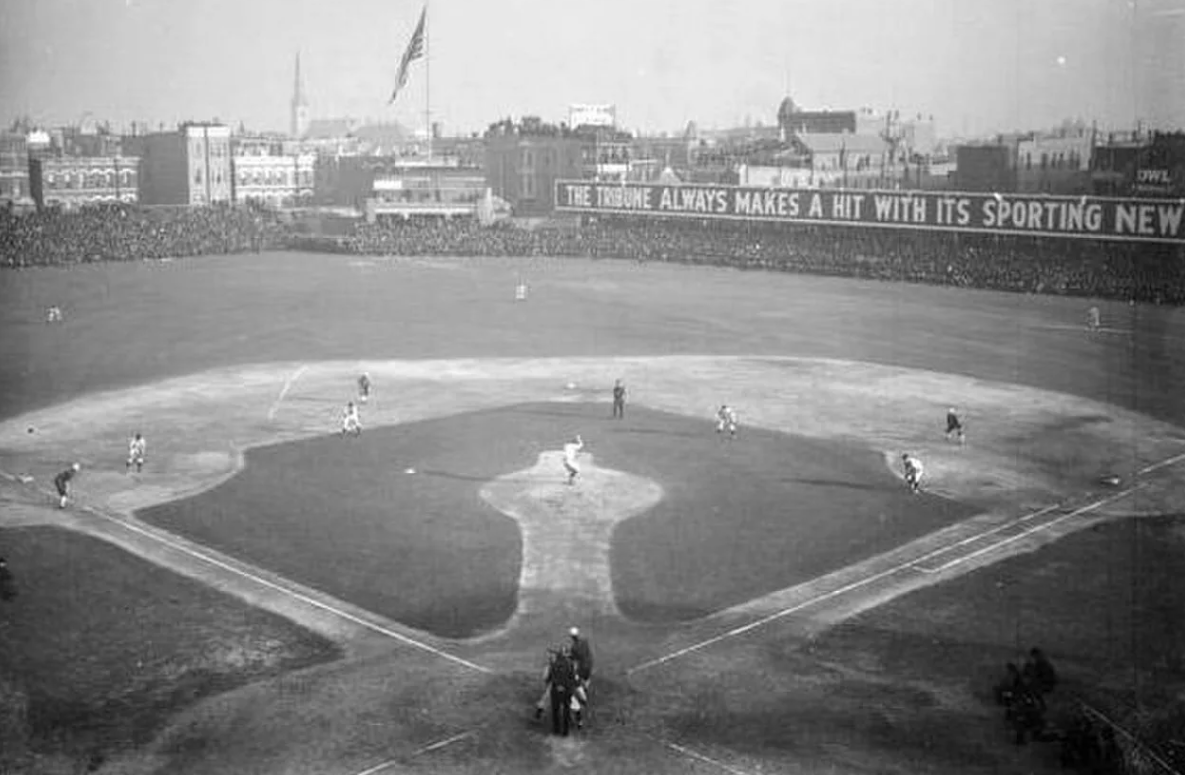 Game 1 featured future Hall of Famer Mordecai "Three-Finger" Brown, who had led the National League in ERA at 1.04 and sported a 26-6 record, for the Cubs against Nick Altrock for the White Sox, a 20-game winner in his own right.

As expected, the offenses struggled to get into a rhythm early in the game, with the Cubs collecting the only hit through the first four innings.  But the White Sox broke through in the fifth with a leadoff triple by third baseman George Rohe and an error by Cubs catcher Johnny Kling one out later on a play at the plate.

The Cubs almost dodged another bullet in the sixth inning, throwing out Altrock as he tried to score from second on a one-out single, but a passed ball and base hit later brought home the second run of the game for the Sox.

That would be all Altrock would need as he worked his way out of a jam in the sixth inning.  He gave up a single run on a wild pitch with two runners in scoring position, but he escaped by getting Jimmy Sheckard a to pop out and Frank Schulte to ground out to end the threat.

The Cubs managed only two harmless singles over the final three innings and were unable to scratch together the tying run.  With an opening loss at home with their ace on the mound, the 1906 World Series had not started well for the West Side club.

Game 2 of the 1906 World Series was a complete turnaround for the Cubs.  Their offense finally came to life with ten hits while young Ed Reulbach, who had ended the season with a 19-4 record and 1.65 ERA, threw a one-hit gem.

The Cubs put the pressure on early, plating three runs in the second inning thanks in part to White Sox second baseman Frank Isbell's errant throw to second on a possible double play ball.

The White Sox, meanwhile, could score only a single unearned run against Reulbach, taking advantage of a walk and a two-out error by Cubs shortstop Joe Tinker in the fifth inning.  In the seventh, Jiggs Donahue finally broke up Reulbach's no-hit bid with a base hit, but even with two on and no outs in that inning the White Sox couldn't cash in.

Joe Tinker redeemed himself with an RBI single and a run scored in the eighth, stretching the Cubs' lead to the winning margin of 7-1 and tying the 1906 World Series at a game apiece heading back to the West Side.

For Game 3, the White Sox turned to a young breakout pitcher name Ed Walsh, a future Hall of Famer who had won 17 games and led the American League with ten shutouts during the regular season.  His opponent would be Cubs lefty and 20-game-winner Jack Pfiester.

Both teams had a runner erased trying to steal second in the first inning, but it was the hometown fans who had to be encouraged as the Cubs hit Walsh hard in the initial frame, producing a lead-off single and a two-out double.

But those would be the only hits that Big Ed would allow.

He sent down batter after batter, striking out twelve Cubs and walking only one while retiring thirteen straight at one point.  The Cubs nearly spoiled the shutout in the ninth after second baseman Frank Isbell booted a lead-off grounder.  But Walsh stranded him at third base by striking out Jimmy Sheckard and Frank Schulte to end the game.

The heavily favored Cubs had lost consecutive home games for the first time since July, and the 1906 World Series was starting to look like a dog fight.

Down two games to one in the 1906 World Series, the Cubs called upon their ace, "Three-Finger" Brown, to go in Game 4 in a rematch against Game 1 winner, Nick Altrock.

Both pitchers were stellar, locked in a scoreless duel through the first six innings of the game.  Realizing the value of a single run, the Cubs played "small ball" in the seventh after Frank Chance's lead-off single.  Steinfeldt sacrificed him to second base and Tinker bunted him over to third, bringing Johnny Evers to the plate with a chance to end the drought.

A base hit to left field untied the game and put the pressure on the home team to figure out the baffling Mordecai Brown.

That just didn't happen as Brown erased a base runner in the eighth with a double play and stranded a runner in scoring position in the ninth to end the game.

The 1906 World Series was tied again, and it appeared that the first home team that could pull out a win would take home the title.

The star of Game 2, Ed Reulbach, took the mound for the Cubs in Game 5, looking to pounce on the quiet White Sox bats, which had still only produced a total of six runs in the first four games of the 1906 World Series.  The South Siders countered with Game 3 hero Ed Walsh.

It was clear in the opening frame that neither pitcher was on top of his game.

Reulbach gave up three hits, including two doubles, and a run in the top of the first to put the Cubs in an early hole.  But the White Sox gave it back and then some when they took the field.

A lead-off single to right field, an infield hit and a hit batter loaded the bases for Cubs third baseman Harry Steinfeldt, who had hit .333 during the first four games of the series.

A ground ball to the shortstop looked like it would get Walsh out of the inning unscathed, but after getting the force at second, Frank Isbell made a bad relay throw to first and allowed the runner from second base to score as well.  Walsh may have let the play get to him as the next batter, Joe Tinker, dropped a bunt which Big Ed fielded, but his throw to first was off and allowed another run to score, putting the South Siders down 3-1.

The White Sox responded in the third with back-to-back doubles to lead off the inning, chasing Reulbach from the game, and a swipe of home by George Davis on a double steal.

They kept the offensive momentum going the following inning by sending Reulbach's replacement, Jack Pfiester, to the showers after a walk, a single and back-to-back doubles.  Jiggs Donahue extended the lead to 7-3 with the inning's third double, but George Rohe was gunned down trying to score on a sacrifice fly to mercifully get the Cubs off the field.

Defensive errors, which were a problem throughout the 1906 World Series for the White Sox, continued to mount in the bottom of the fourth as shortstop George Davis threw wildly to first to put aboard the lead-off man, Joe Tinker, who would eventually score on a wild pitch.

The Cubs found themselves down 8-4 in the bottom of the sixth, but back-to-back two-out walks and another error by Davis loaded up the bases for Frank Schulte, who was hitting only .211 for the series.  But he delivered a clutch double to center field that drove in two, though the fact that it was a ground rule double only allowed the runner at first to advance to third.  Walsh would strand him there by getting Frank Chance to ground out.

The Cubs finally chased Walsh from the game following a lead-off double in the seventh, but White Sox hurler Doc White came in and nailed down the victory with three strong innings.

The home fans were stunned as their heavily-favored Cubs now found themselves one loss from being upset in the 1906 World Series and having to travel back to the South Side for Game 6.

With the series on the line, the Cubs naturally turned to Mordecai Brown to get them a win.  The White Sox, on the other hand, gave the ball to the man who had finished Game 5, Doc White, in hopes that he had righted the ship after his Game 2 disaster.

It didn't look like it would pay off early as Frank Schulte tagged White with an RBI double in the first inning.

But the White Sox got to Brown in the first as well, pummeling four hits, including two doubles, and plating three runs to teh delight of the hometown crowd.

The South Siders then broke the backs of the shell-shocked Cubs in the second with a huge, two-out offensive outburst that saw seven consecutive batters reach base safely.  By the time it was all said and done, the White Sox held a 7-1 lead and "Three-Finger" Brown had taken an early exit.

The Cubs scraped together a run in the fifth against Doc White, but they found themselves down 8-2 heading into the bottom of the ninth.

Joe Tinker grounded out to lead off the inning, but Johnny Evers laced a double to right field.  Another ground out put a runner on third, and then a walk, an RBI single and shortstop Isbell's fifth error of the 1906 World Series loaded the bases with the tying run on deck.

Doc White buckled down and finally got Schulte to ground out to first and give the White Sox an improbable, and yet impressive, World Series title.


The 1906 World Series certainly won't be remembered for its defense.  The White Sox gave up more unearned runs (10) than earned runs (8) and made six errors in the series-clinching Game 6.

Nor will fans look back on the offense with any smiles.  Neither team managed to hit .200 for the series, with the White Sox (.198) barely outpacing the Cubs (.196).

But the Chicago rivalry and "David vs Goliath" atmosphere that surrounded the 1906 World Series made it one that most baseball fans, especially those in the Windy City, will always remember.