The 1907 World Series matched up the defending National League champs, the Chicago Cubs, against the Detroit Tigers and their dynamic young outfielder, Ty Cobb, who had unseated the Philadelphia Athletics with a late-season 10-game winning streak to take the American League pennant.

The Cubs were looking for redemption after losing the title series as heavy favorites the previous year.  The Tigers hoped to cap off their franchise's breakout season under first-year player/manager Hughie Jennings.

The opening game promised an exciting, evenly-matched series, but blowing a ninth-inning lead and an eventual tie seemed to deflate the Tigers, who mustered very little offense the rest of the way.

Meanwhile, the Cubs took the emotional momentum from Game 1 and rode it to the first sweep in World Series history. 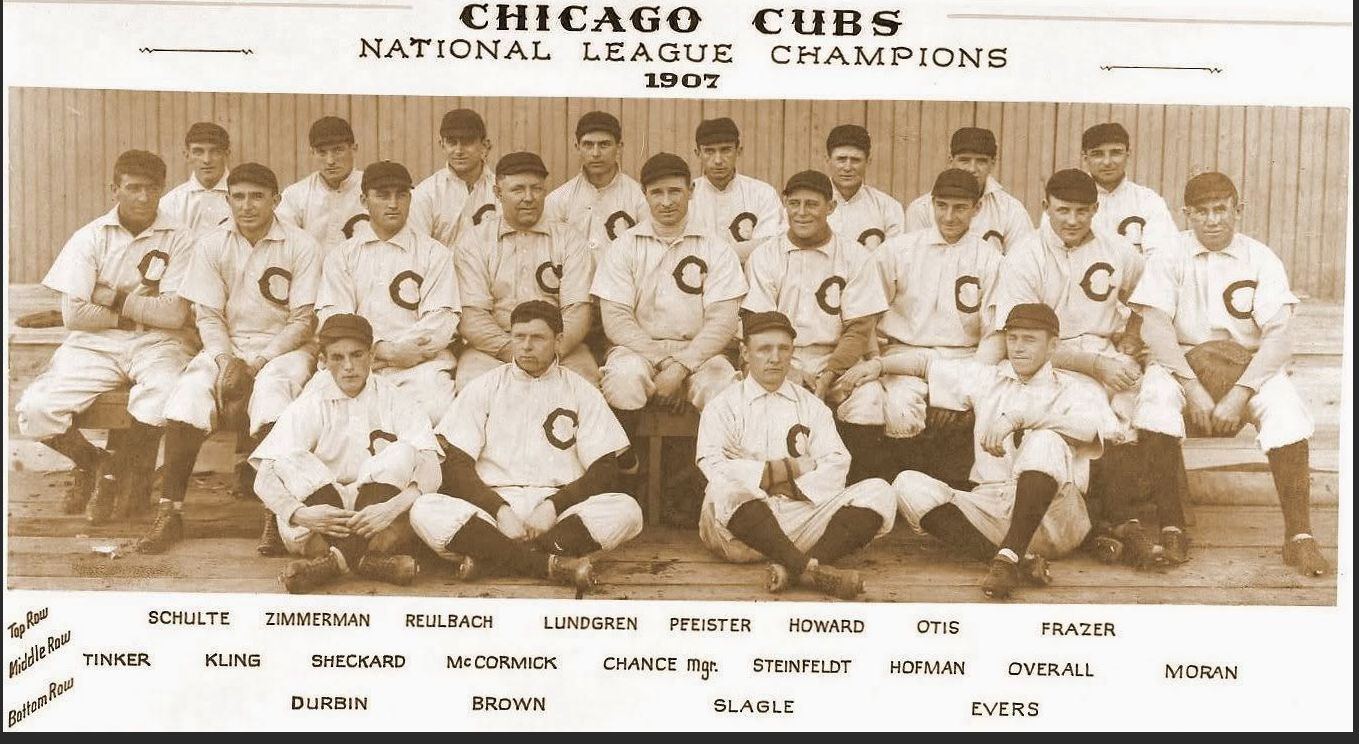 Game 1 of the 1907 World Series would be one for the history books, as the game had to be declared a tie after darkness set in during extra innings.

The pitching match-up between Orval Overall (23-7), who led the National League in shutouts, and Bill Donovan (25-4) held true to form early on, with both hurlers working through the first three innings in scoreless fashion.  But the Cubs manufactured a run in the fourth on an RBI single by Johnny Kling, taking a slim lead that held up until late in the game.

Both teams saw key runners erased off the bases during the middle innings, but in the eighth inning the Tigers finally got on the scoreboard and took what looked like an insurmountable lead.

An error by Cubs shortstop Joe Tinker put runners on first and third with only one out.  Sam Crawford followed that up with a two-RBI hit that gave the Tigers a 2-1 lead, advancing to third on an error by catcher Johnny Kling.  The error parade continued as third baseman Harry Steinfeldt couldn't handle a throw from the pitcher as they tried to erase Crawford on a comebacker to the mound of the bat of Ty Cobb.

Claude Rossman made them pay with a sacrifice fly that gave Detroit a 3-1 lead with only six outs to go.

The Cubs when down in order in the eighth, but they had the heart of their line-up due up in the bottom of the ninth.

Frank Chance got the inning started with a base hit to right, and Steinfeldt took a hit-by-pitch to put the tying runs on base.  A failed sacrifice by Kling looked like it might cost the Cubs dearly, but Tigers third baseman Bill Coughlin bobbled a grounder that loaded up the bases with one out.

After Schulte grounded out to first to drive in a run, the Cubs were down to their final out and still trailing 3-2.

That's when the unthinkable happened.

Donovan worked a strikeout of pinch hitter Del Howard, but the final strike got away from catcher Boss Schmidt, allowing Steinfeldt to score the tying run.

The Cubs aggresively tried to end the game then and there, but Johnny Evers was gunned down trying to steal home, sending the game into extra innings.

Chicago threatened in the tenth, but a runner's interference call ended the inning as a run crossed the plate.  They then loaded the bases in the eleventh with three hits, but a strikeout and lazy grounder thwarted that opportunity.

Finally, after twelve innings and nearly three hours, umpire Hank O'Day called the game a draw on account off darkness.

The 1907 World Series had started with a tie!

With neither team holding the series lead heading into Game 2, the Cubs certainly had to feel that they held the upper hand.

They had spoiled a sure road win by the Tigers with their ninth-inning rally the previous day and were sending the National League's ERA leader to the mound in Jack Pfiester.

On the other hand, the Tigers were reeling from giving away a victory and had George Mullin, a 20-game winner despite leading the American League in hits and earned runs allowed, on the hill.

Detroit opened the scoring in the second when Fred Payne drove home Rossman, who had led off the inning with a triple.

The Cubs responded quickly, loading the bases with no outs in the bottom of the inning.  But after a walk to Joe Tinker, Mullin got Pfiester and Slagle to strike out and retired Sheckard on an easy grounder, keeping the score tied, 1-1.

Mullin wasn't as fortunate in the fourth inning as this time Slagle and Sheckard came through for Chicago, with the former driving in a run with a one-out single and the latter driving him home with a double.

Pfiester would make the 3-1 lead stand, spreading four hits over the final five innings and giving the Cubs a 1-0 lead through two games of the 1907 World Series.

The teams remained in Chicago for Game 3 of the 1907 World Series, and the hometown crowd got the kind of dominating performance they were looking for.

Ed Reulbach returned to the mound for the Cubs and retired the first ten batters he faced while Johnny Evers continued his hot hitting, driving in the first run of the game with a double in the second, his first of three hits on the day.

The game really got away from the Tigers in the middle innings as the Cubs scored three runs on four hits in the bottom of the fourth.  Detroit then got men on second and third with only one out in the top of the fifth, but Charley O'Leary laced a liner to the shortstop who easily tagged Bill Coughlin, the runner at second, for an inning-ending double play.

The Cubs then extended their lead to 5-0 with a double by Frank Chance and RBI single by Steinfeldt, all but putting the game out of reach.

The Tigers managed three hits and a walk in the sixth, but a double play limited them to a single run, and Reulbach cruised the rest of the way to a six-hit, 5-1 victory.

The 1907 World Series would head to Detroit with Ty Cobb and the Detroit Tigers down two games to none.

Game 4 of the 1907 World Series was a rematch of the series opener, pitting 23-game-winner Orval Overall against 25-game-winner Bill Donovan, and in the early going looked like it might be another low-scoring affair.

Ty Cobb produced his only significant offensive contribution to the series in the fourth inning, ripping a two-out triple and scoring the game's first run on a clutch base hit by Claude Rossman.  However, the Tigers' Charley O'Leary struck out with the bases loaded, spoiling a chance to get the big inning they had been lacking all series.

The Cubs, like they had in Game 2, quickly erased Detroit's lead.  Overall helped out his own cause in the top of the fifth with a two-run single that gave Chicago a lead they would not relinquish.

The powerful right-hander didn't give up another hit until the ninth inning while his teammates piled on the runs, scoring three more in the seventh and adding a final tally in the ninth.  Overall finished the game giving up only five hits while striking out six, leading the Cubs to a 6-1 win and a 3-0 lead in the 1907 World Series.

With the World Series title only a single win away, Chicago turned to "Three Finger" Brown, the man who took the loss in the final game of the 1906 World Series, for Game 5.

Detroit, which had scored only one run in each of the previous three games, again failed to get the kind of clutch hitting that would turn into a big inning and couldn't have been encouraged when the Cubs got on the board in the opening frame.

A lead-off walk and stolen base set up Harry Steinfeldt for an RBI single in the first, and Chicago added another run in the third on a bases loaded ground out.

That would be more than enough for the Cubs' crafty righty, who worked out of his only real jam in the fourth inning when, with runners on second and third and one out, he got Coughlin to pop out to the catcher and Archer to lift a lazy fly ball to left.

Brown completed his series-clinching shutout, giving up only seven hits, and delivered the Cubs the 1907 World Series title, their first of two back-to-back championships.


The 1907 World Series confirmed the Cubs' status as baseball's best and its first true dynasty of the new century.

After failing to follow-through on one of the greatest regular seasons of all time the previous year, the West Siders were finally on top.

But despite the historical significance of the 1907 World Series, it would be the following season that would be remembered in baseball lore.