The 1908 World Series followed up one of the most memorable endings to a regular season in baseball history.  Thanks in large part to the infamous "Merkle's Boner" play, the Cubs were back to defend their title in a rematch of the previous year's series against Ty Cobb and the Tigers.

This year Detroit was the team looking for redemption after being swept by the Cubs the year before.  Cobb had once again led the American League in numerous offensive categories and helped the Tigers pace the league in scoring by a comfortable margin.

The Cubs defeated Christy Mathewson in front of a packed and overflowing house, earning their place in history and a chance to compete in the 1908 World Series. 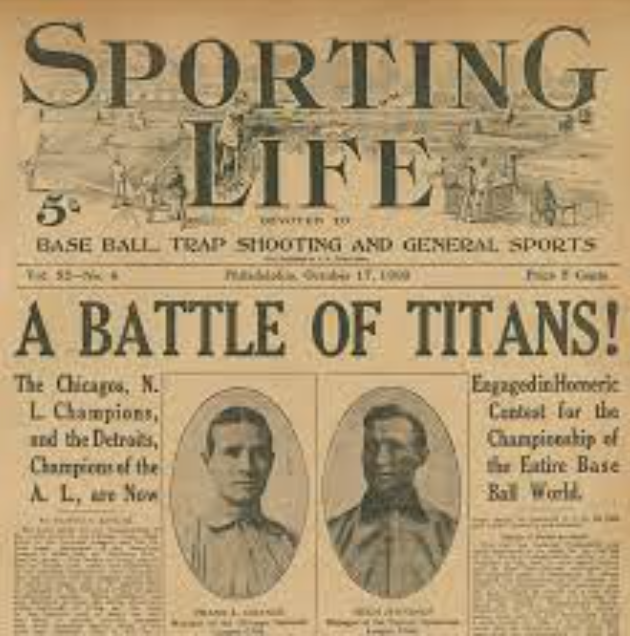 For Game 1 of the 1908 World Series, Chicago sent to the mound 24-game-winner Ed Reulbach, who had pitced exceptionally during the previous year's series.

The Tigers countered with lefty Ed Killian, a 31-year-old veteran from the back end of their rotation who had thrown a one-hitter against the White Sox down the stretch of the pennant race.

Detroit got on the board in the first inning as Ty Cobb singled home lead-off hitter Matty McIntyre with two outs.

The Cubs responded big in the third inning, chasing Tigers starter Ed Killian from the after he could only retire one of the first six batters.  With two runs already in and the bases loaded, Joe Tinker drove in a run with a grounder to second.  Detroit third baseman Germany Schaefer then booted a ball off the bat of Johnny Kling and allowed the fourth run of the inning.

When Chicago added another run in the top of the seventh, extending their lead to 5-1, the Tigers had to be remembering their failures of the previous year.

But they quickly got back in the game in the bottom half of the inning, cashing in on a lead-off single by Ty Cobb.  He scored three batters later on a groundout by Boss Schmidt.  Downs drove home another run with a two-out ground rule double and then scored on a clutch base hit by the pitcher, Ed Summers.

Heading into the final two innings, Detroit now found themselves within one run, down 5-4.

The Cubs threatened in the top of the eighth but stranded Joe Tinker at third.

When Chicago starter Orval Overall walked the lead-off batter in the bottom of the eighth, they pulled him and brought in "Three-Finger" Brown to close out the game.  Only it would be their "poetic" defense that would cost them.

First baseman Frank Chance couldn't handle a throw from Brown on a sacrifice bunt by Ty Cobb, putting men on at the corners with no outs.

Then, after a game-tying single by Claude Rossman, Cubs second baseman Johnny Evers threw the ball away trying to nail the runner at third, allowing the Tigers to take a 6-5 lead.  Brown retired the next three batters to end the inning, but the damage had been done.  It looked like Detroit would finally get that first World Series win that had escaped them in Game 1 a year earlier.

The Chicago half of the ninth started off harmlessly enough, with Johnny Evers grounding out to first base.

But things came unraveled for Detroit after that.

Schulte, Chance and Steinfeldt all got base hits to load the bags for Solly Hofman, who was hitless in three at bats.  Hofman came through with a single to center field, driving in both the tying and go-ahead runs.  While the Tigers hung their heads, the Cubs got back-breaking RBI singles from Joe Tinker and Johnny Kling, giving them a total of five runs in the inning and a 10-6 win as Brown closed out Detroit in the bottom of the ninth.

The Tigers were left shaking their heads once again, beginning the 1908 World Series by giving up a victory, much like they had the year before.

Game 2, for the most part, was a classic  pitchers' duel as the Cubs' Orval Overall took a no-hitter into the fifth and the Tigers' Bill Donovan took one into the sixth.

The game remained scoreless in the bottom of the eighth inning when Chicago shortstop Joe Tinker hit the first World Series home run in five years, a two-run blast to right field that lit a fire under the Cubs offense.

Johnny Kling drove a ground rule double to left, and Sheckard and Evers delivered back-to-back RBI singles.  After Frank Schulte tripled and scored on a wild pitch, Detroit suddenly found themselves down 6-0 heading into the ninth inning.

The Tigers got an RBI base hit from Ty Cobb in the final frame, but it was too little too late.  The Cubs had now taken six straight postseason games from Detroit and were leading the 1908 World Series two games to none.

Game 3 of the 1908 World Series would finally feature Ty Cobb and the Detroit offense.

Cobb got the Tigers on the board in the first inning with an RBI single.

But Chicago held form by retaliating with three runs in the fourth.  Detroit third baseman Bill Coughlin and first baseman Claude Rossman helped out by throwing the ball around the diamond, and Solly Hofman capped off the inning with an RBI triple.

However, this game would be different as the Tigers wouldn't fold.

With two men on and one out in the sixth inning, Detroit got three consecutive base hits from "Wahoo" Sam Crawford, Ty Cobb and Claude Rossman, plating four runs and giving the Tigers the lead again.  After Cobb was thrown out at home trying to score on a fly ball to center, backup catcher Ira Thomas finished off the inning with an RBI double to right-center field.

With their recent late-inning history, the Tigers couldn't feel comfortable with a 6-3 lead, so they tacked on some insurance runs in the eighth inning and won the game handily, 8-3.

Crawford, Cobb and Rossman, the heart of the Detroit line-up, had finally taken a game on their shoulders and delivered a win.  Now down only 2-1 in the 1908 World Series and heading back home, the Tigers looked to capitalize on their momentum.

In baseball, momentum will only take you as far as your next day's starting pitcher.  So in Game 4, the Cubs sent out their momentum-stopper, Mordecai "Three-Finger" Brown to get the 1908 World Series heading back in their direction.

Not only did he get a critical win on the road, his four-hit shut out seem to demoralize Detroit and its fans.

After Chicago took a 2-0 lead in the third with back-to-back RBI singles by Steinfeldt and Hofman, the Tigers botched a scoring opportunity of their own in the fourth.  Ty Cobb failed to advance two runners on a sacrifice bunt, and Sam Crawford was then quickly picked off at second base.

Detroit would manage only one more base runner the rest of the game, and as fans left the stadium with their team trailing 3-1 in the series, it seemed all but over.

Detroit fans barely showed up for Game 5 of the 1908 World Series, and the Tigers offense mirrored the lackluster energy of the crowd.

The Cubs put together back-to-back-to-back singles in the top of the first, with Johnny Evers scoring on a base hit to center off the bat of Frank Chance.  The Tigers, on the other hand, pulled off a statistical feat of their own in the bottom of the first, striking out four times and leaving the bases loaded.

Chicago's Orval Overall put on a brilliant, series-clinching performance, holding Detroit to only three hits, while Frank Chance and Johnny Evers finished off their stellar Fall Classic with three hits apiece in a 2-0 Cubs victory.


Ty Cobb and the Detroit Tigers were establishing their own American League dynasty, having won their second of three straight pennants, but had come up short of the title once again.

The Cubs, on the other hand, had hit the pinnacle of their dynasty with their 1908 World Series triumph.  Joe Tinker, Johnny Evers and Frank Chance were only a short time away from being immortalized in "Baseball's Sad Lexicon."

But little did Cubs fans know, that the 1908 World Series would be their final championship for at least 100 years.