The 1979 World Series saw Willie Stargell and the "Family" bring the title back to Pittsburgh in their first trip to the Fall Classic since the tragic loss of Roberto Clemente.

After making quick work of the Big Red Machine in the National League Championship Series, in which Willie Stargell hit .455 with two home runs and eleven RBI in winning the series MVP, the Pirates were up against Earl Weaver's 102-win Baltimore Orioles, who were making their sixth World Series appearance in fourteen years.

After postponement of the opening game due to inclement weather, the 1979 World Series shaped up to be a classic from the beginning. 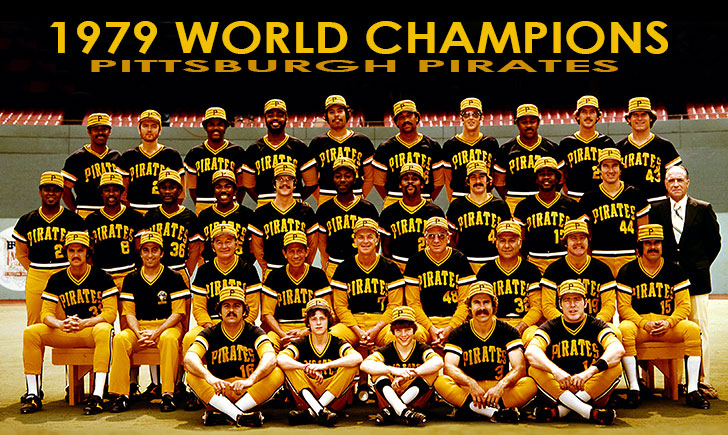 The Orioles exploded out of the gate in Game 1 with five runs in the bottom of the first inning with the help of the cold, wet weather, taking advantage of a throwing error by Pirates second baseman Phil Garner on a possible inning-ending double play ball and a wild pitch by Bruce Kison.  Doug DeCinces then capped off the inning with a two-run home run, all but ending Kison's day.

The Pirates bull pen came in and shut down the Orioles, allowing just three more hits after that first inning, while Willie Stargell and company got busy chipping into the five-run lead during the middle innings.

Stargell managed to push across a run in the fourth inning with a ground out, and Dave Parker's third of four hits on the day leading off the sixth inning set up a two-run single by Garner.  Stargell then cut the lead to a single run in the eighth with a leadoff home run.

The Pirates made it interesting in the ninth when an error allowed Parker to advance to second despite being picked off on a steal attempt.  But 23-game-winner Mike Flanagan finished his complete game and gave the Orioles the one-game lead in the 1979 World Series by getting Bill Robinson to ground out to second and Stargell to lift an easy pop up to shortstop.

Game 2 of the 1979 World Series saw the Pirates strike first, putting together three straight base hits and a sac fly to take a 2-0 lead in the top of the second inning off three-time Cy Young Award winner Jim Palmer.  But Eddie Murray quickly cut that lead in half with the game's only home run to leadoff the bottom of the inning.

Future Hall of Famers Palmer and Bert Blyleven dueled without a blemish through the next three innings, but Murray came through again in the sixth by following a leadoff single by Ken Singleton with an RBI double to tie the game at 2-2.  It looked like the Orioles were primed to take the lead after moving Murray to third base with one out, but he was gunned down by Dave Parker trying to score on John Lowenstein's line out to right field.

Both teams left the bases loaded in the seventh inning, and the Pirates overcame Murray's third hit of the game and an error on a sacrifice bunt with an unconventional run-down double play in the eighth.  In the top of the ninth it appeared the Pirates had wasted another opportunity when Bill Robinson was caught stealing after a leadoff hit.

With two outs Ed Ott singled and closer Don Stanhouse walked Phil Garner to put the lead run in scoring position.  Pinch hitter Manny Sanguillen came through with a base hit to give the Pirates the lead, and closer Kent Tekulve made it stand up with two strikeouts in the ninth, evening up the 1979 World Series at a game apiece heading back to Pittsburgh.

The Pirates gave the home town crowd something to cheer about early in Game 3 as they jumped out to a 3-0 lead in the first two innings, highlighted by a two-run double by the hot-hitting Phil Garner.  But the Orioles answered with a two-run blast by Benny Ayala in the third inning off starter John Candelaria and nearly tied the game when Ken Singleton was gunned down at home to end the inning.

The troubles continued for Candelaria in the fourth as the Orioles loaded the bases with a leadoff double by Rich Dauer, a single by Rick Dempsey and an error by shorstop Tim Foli.  Kiko Garcia then cleared the bases with a triple, his second of four hits on the game, and ended Candelaria's night.  Reliever Enrique Romo didn't help matters much by producing a hit batter, a wild pitch and two more runs before the five-run inning came to a merciful end.

Orioles starter Scott McGregor settled in with the 7-3 lead, allowing only three hits and one run over the last six innings, and Baltimore cruised to a 8-4 win and a 2-1 lead in the 1979 World Series.

But Baltimore showed its moxy once again, posting its own crooked number in the third inning with RBI doubles by Kiko Garcia and Ken Singleton and trimming the Pirate lead to 4-3.

Pirates fans were feeling good during the middle innings as they extended their lead to 6-3 with an RBI double by John Milner in the fifth and another by Dave Parker in the sixth while their defense turned double plays in the fourth, fifth and seventh innings.  But their joy turned to despair when the Orioles put together their third five-run inning of the series in the eighth.

Baltimore loaded the bases with one out and got a clutch two-run double from pinch hitter John Lowenstein off Pirates closer Kent Tekulve, cutting the lead to 6-5.  An intentional walk loaded the bases again for another pinch hitter, Terry Crowley, who had only 20 hits and seven extra-base hits during the regular season.  But he came through with a crushing two-run double to give the Orioles the a lead they wouldn't relinquish.  By the time the Pirates left the field they were down 9-6.

Pittsburgh still managed three hits in the final two innings, but they could push no more runs across.  Heading into the last 1979 World Series game to be played at Three Rivers Stadium the Pirates found themselves down 3-1 and had no more room for error.

The Pirates sent veteran lefty Jim Rooker, who had barely logged 100 innings during the regular season and managed only four wins, to the hill for Game 5 of the 1979 World Series against an Orioles offense that had plated 17 runs in the previous two games.

To the delight of the home town crowd Rooker gave up only a single baserunner on a walk through the first four innings, matching the scoreless efforts of Orioles ace and Game 1 winner Mike Flanagan.  Baltimore took a 1-0 lead in the fifth on a double play ground out, but it ultimately kept them from turning three hits and a walk into a big inning.  And it would be the only run they would score as Bert Blyleven and his curveball shut down the Oriole bats through the final four innings.

The Pirates, on the other hand, woke up on offense in the sixth with a sacrifice fly from Willie Stargell and two-out RBI single by Bill Madlock.  In the seventh they added some insurance runs despite poorly executing the "small ball" strategy, taking advantage of a botched pick off with a Tom Foli triple and Dave Parker double to give them a 4-1 lead.

Garner and Foli then put the game out of reach in the eighth with RBI base hits, giving the Pirates a 7-1 victory and sending the 1979 World Series back to Baltimore.

The Orioles looked to future Hall of Famer Jim Palmer to clinch the title in Game 6, but it was Game 3 loser John Candelaria and closer Kent Tekulve for the Pirates who dominated the game.

The Baltimore bats, which had produced an average of six runs per game through the first four games of the 1979 World Series, remained silent despite four leadoff hits in the first five innings.

After Dave Parker and Willie Stargell broke the scoreless tie in the top of the seventh against Palmer, who gave up another two runs in the eighth, Tekulve came in a yielded only a single hit during the game's final three innings.  The 1979 World Series would come down to a "winner take all" Game 7.

The final and deciding game of the 1979 World Series saw the Pirates unable to take advantage of leadoff hits by Omar Moreno and Willie Stargell in the first two innings while Orioles second baseman Rich Dauer led off the third inning with a solo shot.

Scott McGregor made that 1-0 Baltimore lead stand through five innings of scoreless work, but after Bill Robinson single with one out in the sixth Willie Stargell launched a mammoth home run to right to give the Pirates a 2-1 lead.

That one swing seemed to take the air out of the Oriole offense.  Pirates reliever Grant Jackson sent Baltimore down in order in the sixth inning and again in the seventh.  He ran into some trouble with one out in the eighth after walking pinch hitter Lee May and leadoff hitter Al Bumbry, but the Pirates called on closer Tekulve for the fifth time during the series and he delivered.  He coaxed a groundout from pinch hitter Terry Crowley, and after intentionally walking heavy-hitting first baseman Ken Singleton, who had driven in 111 runs during the season, he got future Hall of Famer Eddie Murray to fly out deep to right the end the threat.

Pittsburgh tacked on two more runs in the top of the ninth, and after Tekulve struck out Roenicke and DeCinces in the bottom of the ninth, pinch hitter Pat Kelly flew out to center field where Omar Moreno squeezed the final out of the 1979 World Series.

Willie "Pops" Stargell, named the 1979 World Series MVP with twelve hits, three home runs and seven RBI, had brought the championship back to Pittsburgh with a lot of help from the "family."  Second baseman Phil Garner batted .500 with five RBI, and Tim Foli, Omar Moreno and Dave Parker all recorded at least ten hits.

With their backs against the wall the Pirates had become only the fourth team in baseball history to rally back from a 3-1 deficit to win a seven game series, making the 1979 World Series one of the more compelling Fall Classics ever. 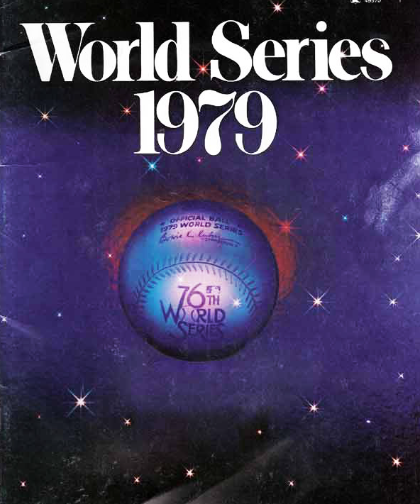