The mystique and tradition of baseball Opening Day, scheduled on April 1 for the 2013 season, is unlike the beginning of any other season.

Spring has sprung.  Summer is just around the corner.  The President toes the rubber.  Every team, no matter how much of an underdog, is in the pennant race.

The impossible is possible.

Many baseball families, including ours here at the Vault, essentially consider baseball Opening Day to be a holiday.

Many fans spend the day at the ballpark, soaking in the hometown team's euphoric atmosphere and telling stories of their favorite heroes of the past while shoving ungodly quantities of hot dogs into their faces.  Their team's Opening Day starter is unquestionably a Cy Young candidate, and the opposing right fielder has no business being on a major league roster.

For the Vault, our baseball Opening Day tradition has become a multi-day marathon of television, movies, backyard wiffle ball and just playing catch.

The Day Before - The entire family, and often many friends, invade the home of a lucky family member, after receiving the spouse's permission of course, the evening before the big day, usually taking in the traditional season opener.  If no game is scheduled that night, a selection like The Natural or The Sandlot will often kick off our festivities.

8 a.m. - After crashing for the night, a running of Ken Burns' Baseball documentary is standard operating procedure on Opening Day morning, providing the perfect backdrop for reliving great baseball moments of the past and making up stories of personal Little League success.

11 a.m. - A "healthy" amount of brats, burgers and hot dogs await us as the first games get underway around lunch time.  Naturally, the most compelling games get television priority...unless my father's fantasy baseball ace is on the mound in another match-up.

3-5 p.m. - Throughout the day when the games hit a lull, or the Royals get too embarassing to handle or my dad's ace gets knocked around, we quickly round up the gloves and bats...and ice packs.  The youth and energy of the kids take center stage while the adults wonder why we would think we could run that hard and not pull something.

10 p.m. and beyond - Typically baseball is kind to its fans, though not always, and has games slated all day long, taking us from late morning into the late hours of the West Coast games.

When all is said and done we've usually watched five to ten baseball games, had more hot dogs than hours of sleep, rediscovered our "famous" curveball and negotiated reimbursing a neighbor for a broken window.

It just doesn't get any better than baseball Opening Day.

And if you're ever in Kansas City looking for a good baseball Opening Day experience, just contact us and see what we're up to this year.  The door is always open!

Since President William Howard Taft first threw out the first pitch on Opening Day in 1910, preceding the game between the Washington Senators and Philadelphia Athletics, the bond between America's leader and its pastime has been almost unbreakable.

Only Jimmy Carter failed to take the mound during his years in the Oval Office, and he made up for it by throwing out the first pitch in the new PETCO Park on Opening Day in 2004. 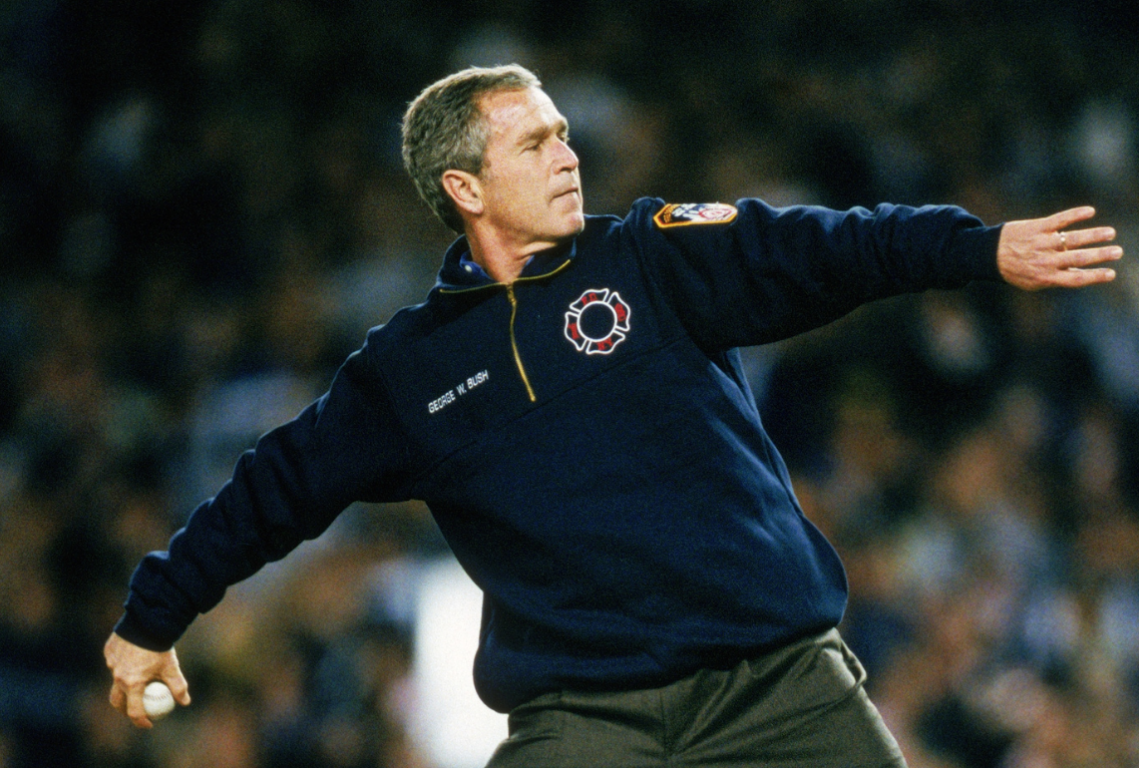 Over the years our fearless leaders, representing a wide range of athletic skill levels, have provided some of their own memorable moments.

April 14, 1910 - On that historic April day in 1910, President Taft refused to let legendary hurler Walter Johnson out of the spotlight.  After his aide overheard Johnson decline the opportunity to catch the ceremonial first pitch, Taft adjust his throw and hurled the ball toward the foul line where a suprised, but alert, Johnson fielded it to the roar of the crowd.

April 16, 1940 - In 1940, Franklin D. Roosevelt, who already had several baseball Opening Day pitches under his belt, delivered a comical throw of his own.  Washington Post photographer Irving Schlossenberg, who covered the White House and was looking to capture the moment, became the inadvertent target.  As Roosevelt released the ball, it sailed wildly and smashed Schlossenberg's camera, a moment the former Marine combat correspondent would cherish.

April 18, 1950 - President Harry Truman, a lefty, was also known to write with his right hand on occasion.  But in 1950, he took that dual-handedness to the baseball diamond where, during the Opening Day ceremonies, he threw two first pitches--one with his left hand and one with his right.

April 6, 1973 - After the Senators left Washington, D.C. following the 1971 season, the Presidential tradition was left somewhat in flux.  But in 1973, President Richard Nixon kept the tradition alive with a trip to Anaheim, California, and the first baseball Opening Day first pitch to be delivered outside of the capital.

April 2, 1984 - Back in 1984, President Ronald Reagan threw out the traditional first pitch at Memorial Stadium in Baltimore...and then proceeded to become the first President to watch the game from the dugout!  Two years later he would follow up that performance with a first pitch that sailed well over catcher Rick Dempsey's head.

April 5, 1993 - President Bill Clinton, opening the 1993 season in Baltimore, did what no other President had dared to do.  He walked out onto the field and climbed the pitcher's mound.  He even managed to get the ball all the way to the catcher in the air!

April 25, 1901 - The Detroit Tigers certainly did not save the best for last when they opened their inaugural American League season in 1901.  Trailing the Milwaukee Brewers 13-4 heading into the bottom of the ninth inning, leadoff hitter Doc Casey's double seemed innocent enough.  But an energized offense and woeful defense by the Brewers set up "Pop" Dillon with two on and two out, trailing 13-12.  He came through with a game-winning two-run double that capped the greatest comeback in franchise history.  On day one.

April 18, 1923 - The legend of "The House That Ruth Built" began to be written as soon as Yankee Stadium opened its doors.  In its first game, Babe Ruth delivered a majestic third-inning blast against his former team, the Boston Red Sox, giving the Yankees a 4-1 Opening Day victory and indicating that his poor performance in the 1922 World Series would not carry over into his new home.

April 13, 1926 - To open the 1926 campaign, 38-year-old legend Walter Johnson, already a winner of 397 games, may have treated fans to the most impressive victory of his illustrious career.  Johnson locked horns with knuckleballer Eddie Romel for an astounding 15 innings of scoreless baseball, yielding only six hits and three walks while striking out nine.  His Senators finally broke through in the bottom of the inning and delivered Big Train a much-deserved 1-0 win.

April 16, 1940 - Bob Feller had broken out in 1939 with a 24-9 record and 2.85 ERA at the ripe old age of twenty.  So what did the "Heater From Van Meter" do for an encore?  He went into a frigid Comiskey Park in Chicago and no-hit the White Sox on Opening Day, aided by a spectacular play from second baseman Ray Mack to get Taft Wright to end the game.

April 15, 1947 - Major League baseball's color barrier, impenetrable for nearly 70 years, was discarded on baseball Opening Day 1947 when Jackie Robinson made his way to first base at Ebbets Field for the Brooklyn Dodgers.  He didn't hit a historic home run or dazzle the fans with his superb athleticism on the basepaths, though those days would come.  He simply changed the game forever.

April 4, 1974 - Hank Aaron entered the 1974 season only single home run shy of Babe Ruth's career record of 714.  While many wanted the 40-year-old slugger to sit on the bench until the team returned home to Atlanta, Hammerin' Hank was told by the commissioner he had to play in the opening series at Cincinnati.  He promptly stepped up to the plate in the first inning with two men on and ended the drama with a blast to left-center field.  In much the same fashion, he ended the drama early in Atlanta by eclipsing Ruth in his home opener only four days later.

April 8, 1975 - On a day when Frank Robinson was making history as the first African-American manager in major league history, it was his bat that would rule the day.  Having already homered seven times on Opening Day during his career, Robinson was no stranger to starting the season strong.  And in his first inning at-bat against Doc Medich, he delivered a solo shot that helped win the game and get his managerial career off to a strong start as well.

April 1, 1996 - Tragedy struck baseball Opening Day in 1996 when veteran National League umpire John McSherry collapsed and died of a massive heart attack only seven pitches into a game between the Montreal Expos and Cincinnati Reds.  Controversial Reds owner Marge Schott only made matters worse, expressing her displeasure at the decision to call off the game and saying, "Snow this morning and now this.  I don't believe it.  I feel cheated.  This isn't supposed to happen to us, not in Cincinnati.  This is our history, our tradition, our team."

April 4, 1988 / April 4,1994 / April 4, 2005 - The home run hat trick is a rarity for obvious reasons.  But opening the season with three canon shots has only been accomplished a few times, and not by anyone knocking on Cooperstown's door, either.  The first was Toronto's George Bell, taking former Cy Young Award winner Bret Saberhagen yard three times to kick off the 1988 campaign.  A few years later, an obscure outfielder for the Cubs hit three (of his eight for the season) dingers in a 1994 loss (what else?) to the Mets.  And the Royals again were snake-bitten in 2005 as the Tigers' Dmitri Young blasted three over the deep Kauffman Stadium walls on baseball Opening Day.


For more than a century, baseball Opening Day has represented the expectations and dreams of baseball fans everywhere.  When the Tigers made their unbelievable comeback in the American League's second game ever, they characterized the national pastime's annual dawning perfectly.

On baseball Opening Day...anything is possible. 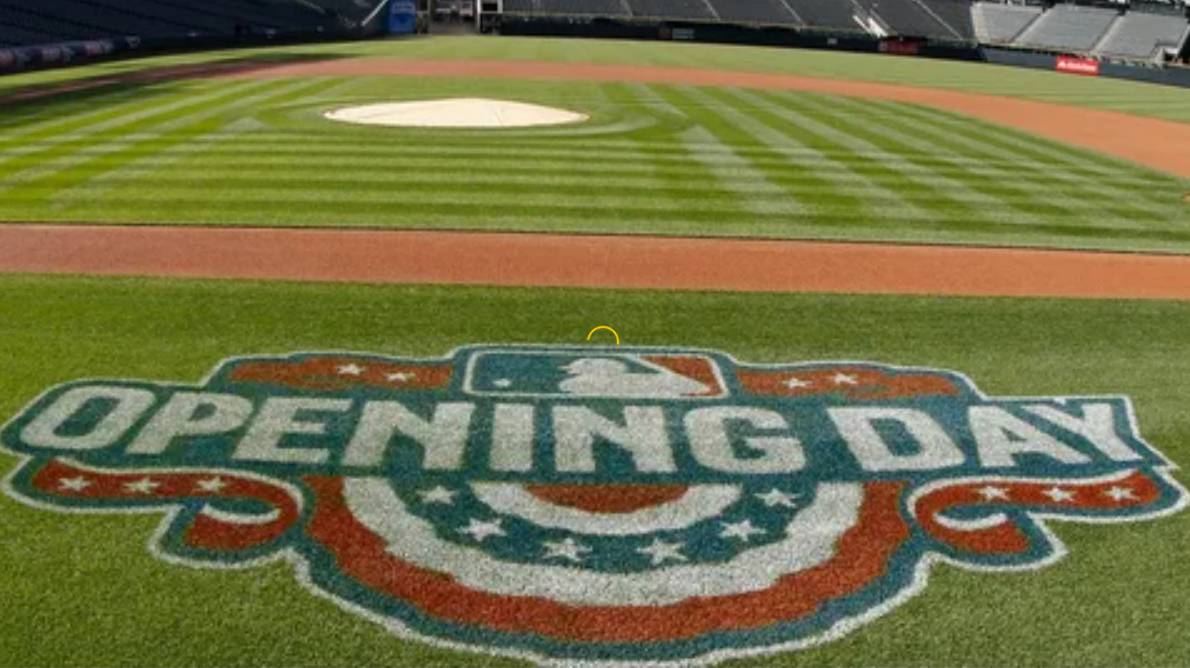