Casey Stengel quotes come from the famous manager's ability to ramble on without saying a thing, leaving fans and reporters speechless.

Casey had fun with his use of language, and he left baseball fans with a library of oddball observations and wacky wisdom.

"Been in this game a hundred years, but I see new ways to lose 'em I never knew existed before."
- as manager of the Mets

"Can't anybody here play this game?"
- also as manager of the Mets

"Most ball games are lost, not won."
- one of the most insightful Casey Stengel quotes

"You got to get twenty-seven outs to win."

"There comes a time in every man's life, and I've had plenty of them."

"I was such a dangerous hitter I even got intentional walks during batting practice."

"You have to draft a catcher, because if you don't have one, the pitch will roll all the way back to the screen."

"If this keeps up I'm about to manage until I'm a hundred."
- after a 4-game winning streak

"He has it in his body to be great."
- on Mickey Mantle

"This boy could pick up all the marbles in this circuit--batting, home runs, runs driven in.  Nothing is beyond him.  Nothing.  He could be the No. 1 player of our league."
- on Mickey Mantle

"He should lead the league in everything.  With his combination of speed and power he should win the triple batting crown every year.  In fact, he should do anything he wants to do."
- on Mickey Mantle

"He threw the ball as far from the bat and as close to the plate as possible."
- on Satchel Paige

"He was very brave at the plate.  You rarely saw him fall away from a pitch.  He stayed right in there.  No one drove him out."
- on Babe Ruth

"He'd fall in a sewer and come up with a gold watch."
- on Yogi Berra

"Mister, that boy couldn't hit the ground if he fell out of an airplane."
- on a player sent down to the minors

"We was going to get you a birthday cake, but we figured you'd drop it."
- to Marv Throneberry

"Don't cut my throat, I may want to do that later myself."

"Best thing wrong with Jack Fisher is nothing."

"Them are the only ones the other teams ain't hitting."
- on keeping a poor-hitting catcher in the line-up who was known for blocking pitches in the dirt

"If we're going to win the pennant, we've got to start thinking we're not as good as we think we are."

"Managing is getting paid for home runs someone else hits."

"It's wonderful to meet so many friends that I didn't used to like."
- after an old-timers game in 1971

"Old-timers weekends and airplane landings are alike.  If you can walk away from them, they're successful."

"Managing a team back then was a tough business.  Whenever I decided to release a guy, I always had his room searched for a gun.  You couldn't take any chances with some of them birds."
- on managing the Brooklyn Dodgers during the 1930's

"Son, we'd like to keep you around this season, but we're going to try to win a pennant."
- one of the Casey Stengel quotes that summed up his no-nonsense managing

"They brought me up to the Brooklyn Dodgers, which at that time was in Brooklyn."

"They say you can't do it, but sometimes it doesn't always work."

"Up there, people are beginning to talk."
- taking a pitcher out of a game, pointing to the stands

"We've got to learn to stay out of triple plays."
- thoughts on the next year after ending a season on a triple play

"I'll never make the mistake of being seventy again."
- on retiring in 1960, one of the Casey Stengel quotes he revived many times

"You make your own luck.  Some people have bad luck all their lives."

Casey was one of a kind.  And these classic Casey Stengel quotes are as well.

Stengelese took on a life of its own and solidified its place in baseball history as one of the great resources for baseball quotes.

So if someone asks you what you think about baseball, life, or anything, just pull out of the best Casey Stengel quotes that wasn't even from Casey:

"My views are just about the same as Casey's."  - Mickey Mantle 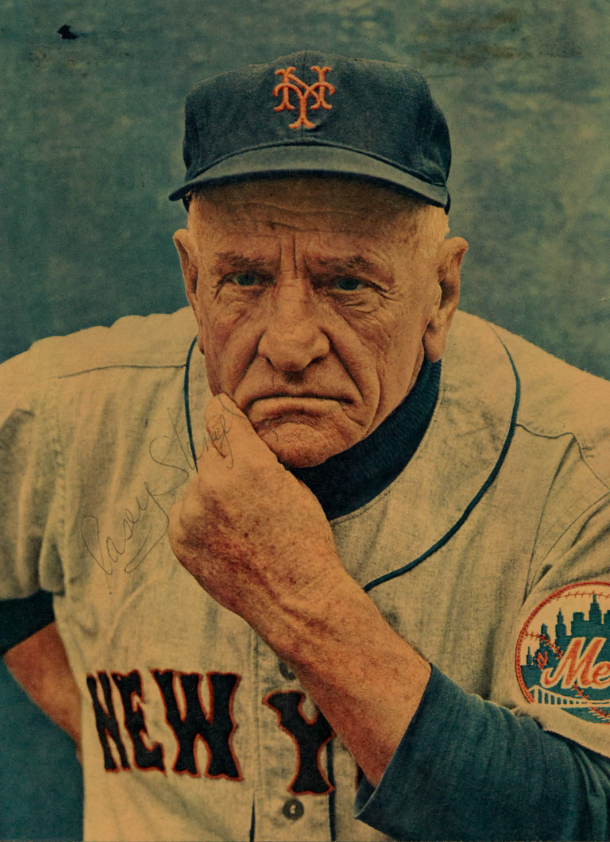