The first baseball game can be hard to nail down.  After all, it was a children's game long before it was our national pastime.  But there was one unassuming game in 1846 that can be said to have started it all.

In 1845 a group of gentlemen in New York City, who regularly got together to play "base ball," had decided to organize into the Knickerbocker Base Ball Club in order to bring some consistency to this game they all enjoyed with some guidelines for rules and conduct.

They included in their by-laws 20 rules that would become known as the "Knickerbocker Rules" and begin moving the game from "child's play" to "national pastime."

But it wasn't until the next year that the first baseball game would actually be played under those new rules.

The Knickerbocker Club had made some important changes to the way the game would be played.

Most notably, they created "foul ball" territory and got rid of the rule that allowed players to be hit with the ball (ouch!) to make an out.

These set their game apart from the many other "bat and ball" games that were being played around the country and would prove to be what set the New York game of "base ball" as the standard.

Finally, on June 19, 1846, the Knickerbockers got their first opportunity to implement the club's new rules against another club.

The game took place at Elysian Fields in Hoboken, New Jersey, and matched them up against a New York Club that had beaten a group of cricket players from Brooklyn at a base ball match the year before, 24-4.

But the teams agreed to use the Knickerbocker Rules for this match, and most of the Knickerbockers were confident that the first baseball game under their rules would go their way.  And why not?  They had been playing intrasquad practice games for some time now.

They even had one of their co-founders, Alexander Cartwright, as the umpire for the game.  Talk about an advantage!

It was a hot afternoon, and many of the club members' friends gathered to watch the game.

Unfortunately for the Knickerbockers, the New York pitcher blew them away with his speed and their hitters knocked the ball around the field.  The New York Club won easily, 23-1, in the 4-inning game (first team to 21 won).

The simple box score for the first baseball game looked like this:


Now as you can see by even the box score, the game was still in a pretty crude state at this point (there weren't even called balls or strikes yet!).

But this game was a defining moment for baseball.  No more "soaking" (throwing at a runner to get him out).  Foul territory (whereas other games allowed the ball to be in play anywhere!).

The first baseball game didn't immediately turn the game into the national pastime (there aren't even any records of games for the next few years!).  But the New York style of "base ball" had definitely set itself apart. 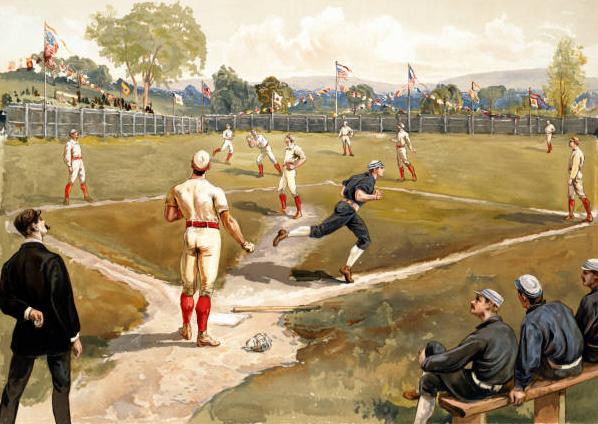