The Knickerbocker Rules were the 20 rules published in 1845 within the by-laws of the Knickerbocker Base Ball Club in New York that became the basis for the game of baseball we know and love today. 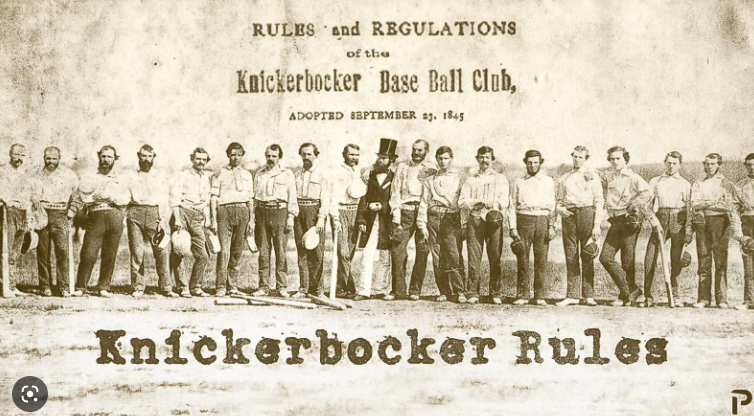 The first thing to notice about the Knickerbocker Rules is that almost half of them have little or nothing to do with actually playing the game.  Instead, they addressed who would play and when.

Base ball had been primarily a children's game, played as far back as the mid-1700's.  So most of the rules and organization of the game were probably pretty fluid, as evidenced by the fact that there were many similar games of different names being played around the country at that time.

Before the Knickerbocker Rules were established the gentlemen likely had issues trying to organize games.

When are we going to play?

How many are going to play?  And who?  What if others show up late?

These frustrations were part of what kept the game from gaining the attention of adults during the first half of the 19th century.

When it comes to the rules about playing the game, the one that immediately jumps out is Rule #13.

Not because it shows that originally runners could be forced out at any base no matter what, but that they had to clarify that the ball could not be thrown at the runner to make an out (called "soaking")!

This was a huge, revolutionary step in the game's development.  It set the game apart from the other games of the time, like town ball in Philadelphia and the "Massachusetts Game" in New England, and made it more appealing to adults.

Another key rule was Rule #10 that made hits outside the line of first or third base a foul ball.

Again, this set the Knickerbocker game apart because other forms allowed for balls to be in play no matter where they went.  Even backward over the head of the catcher!

Not only did this make the game more enjoyable, but it meant that they needed less room to play the game--a big deal in urban cities where open fields and large grounds were hard to come by.

Finally, there are a few notable rules that have been modified for the good of the game.

Rule #4 vaguely structured (using paces) the dimensions of the infield.  With 42 paces from corner to corner, that put the base paths at about 30 paces, or about 75 feet.

So the perfection that is "90 feet between bases" was not part of the original game of baseball.  But when the base paths were finally defined in 1857, the First Base Ball Convention absolutely nailed it.

Rule #9 states that the ball could only be "pitched" and not "thrown," meaning it had to be tossed underhanded (think pitching horseshoes).  While we still call it "pitching" today, today's pitchers are really "throwing" the ball according to the Knickerbocker Rules!

Rule #12 allowed for outs to be made by catching a fly ball or catching the ball after only one bounce!  Thankfully, and after many years of rigorous debate, the bounce rule was eliminated.

Can you imagine how boring Willie Mays' catch in the 1954 World Series would have looked if he could have allowed it to bounce before scooping it up for the out?

Even if the Knickerbockers didn't have ideas of sold-out stadiums and home run derby contests in mind, there's no denying that these 20 old school baseball rules changed the future of the game.

From child's play to national pastime.

So the next time you're watching a baseball game and see a player get in a "run down", or if you are fortunate enough to catch a foul ball in the stands, think of the Knickerbocker Rules.

Without them, you're probably watching the game from hundreds of feet further away.  And the runner would be unconscious.